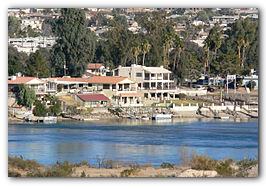 According to 2010 Census Bureau estimates, the population of the city was 39,540. The nearby communities of Laughlin; Needles; Fort Mohave; and Mohave Valley bring the Bullhead area’s total population to about 100,000, making it the largest micropolitan area in Mohave County.

Serving as the economic hub and shopping center for Mohave and Southeastern Clark County, Nevada, Bullhead City has over 5 million people travel through the area annually. The weather of year-round sunshine makes Bullhead City attractive to retirees and vacationing families as well.

Bullhead City has a low desert climate with very low relative humidity and high summer temperatures. On average, it receives about 7 inches of precipitation a year. MOst of the stores, shops, restaurants, theaters and homes are air-conditioned much of the year.

Whether you're a first-time homebuyer, wanting to refinance your existing home or...