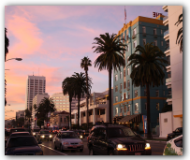 Due in part to an agreeable climate, Santa Monica became a famed resort town by the early 20th century. The city has experienced a boom since the late 1980s through the revitalization of its downtown core, significant job growth and increased tourism. The Santa Monica Pier remains a popular and iconic destination.

According to the 2010 United States Census, Santa Monica had a median household income of $73,649, with 11.2% of the population living below the federal poverty line.