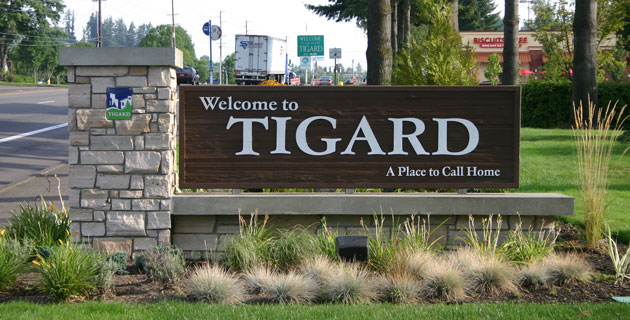 Tigard is located in Washington County, Oregon. The population was 48,035 at the 2010 census. Incorporated in 1961, the city is located south of Beaverton and north of Tualatin, and is part of the Portland metropolitan area. Interstate 5 and Oregon Route 217 are the main freeways in the city, with Oregon Route 99W and Oregon Route 210 serving as other major highways, with rail service provided by the TriMet operated Westside Express Service.

The John Tigard House, constructed by the son of Wilson M. Tigard in 1880 at the corner of SW Pacific Hwy and SW Gaarde St, remains, having been saved from demolition in the 1970s by the Tigard Area Historical and Preservation Association. It became registered as a National Historic Place in 1979, and now resides at the corner of SW Canterbury Lane and SW 103rd.   During the Portland Rose Festival every summer, the Tigard Festival of Ballons is held at Cook Park near Tigard High School. The tallest building in both the city and county is a 12-story building at Lincoln Center.