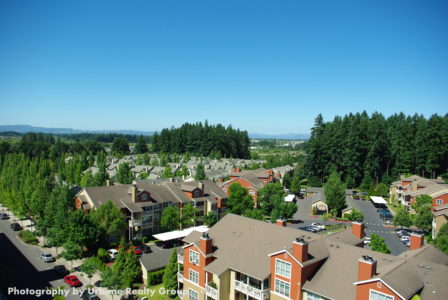 Tualatin is located primarily in Washington County in the state of Oregon. A small portion of the city is also located in neighboring Clackamas County. It is a southwestern suburb in the Portland Metropolitan Area that is located south of Tigard. The population was 26,054 at the 2010 census.

Tualatin and neighboring Tigard, are home to Bridgeport Village (“Bridgeport”), an upscale shopping area that opened in early 2005. Built at the site of a former quarry, Bridgeport was designed to be reminiscent of an open-air European-style shopping experience. It features about 75 shops and restaurants, an 18-screen movie theater, several national and regional chain restaurants, and many chain retail stores.

There are many factories on the south side of town, including a large Novellus Systems plant that makes electrochemical deposition tools for manufacturing semiconductors. Knife manufacturers Kershaw Knives and CRKT are located in Tualatin.

From the 1960s through the 1980s, Tualatin was the home of Sunn Musical Equipment Company, a manufacturer of musical and sound reinforcement equipment.

Tualatin is sometimes used as a filming location for Hollywood movies, including the 2005 comedy-drama Thumbsucker, which was filmed at Tualatin High School.