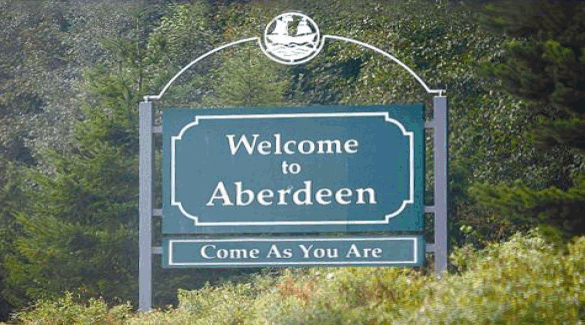 Thank you for visiting our Aberdeen Relocation Guide. The information provided below is meant to inform about Aberdeen, and make moving to Aberdeen a smooth and successful experience.

The city of Aberdeen Washington is located on the southern edge of the Olympic Peninsula at the convergence of the Wishkah and Chehalis Rivers. The history of this area has been driven by the logging and fishing industries, although in the last few years there has been a concerted effort to replace these with an emphasis on tourism and designating Aberdeen as the largest retail center on the Washington Coast.

Located in Grays Harbor County, Washington, Aberdeen was founded by Samuel Benn in 1884, and was incorporated on May 12, 1890. The city is the economic center of Grays Harbor County, bordering the cities of Hoquiam and Cosmopolis.  Aberdeen is called the “Gateway to the Olympic Peninsula”, and it is well known for being the hometown of Nirvana members Kurt Cobain and Krist Novoselic. The population was 16,334 in 2016, according to the U.S. Census Bureau.

City of Aberdeen, Washington
Breathtaking viewpoints and all the amenities of an urban area along with a bountiful natural environment, and a growing economy!