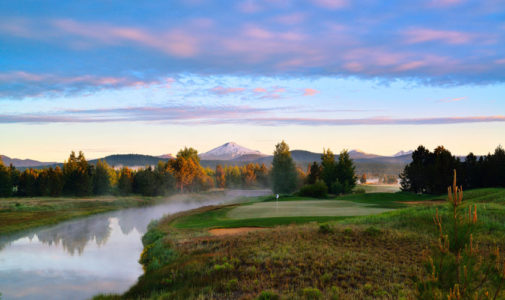 Sunriver, Oregon is a 3,300-acre (1,300 ha) private planned resort community in Deschutes County, Oregon, United States. It is part of the Bend, Oregon Metropolitan Statistical Area. It is located on the eastern flank of the Deschutes River about 15 miles (24 km) south of Bend at the base of the Cascade Range.

Sunriver consists of residential areas, recreational facilities, the Sunriver Resort and a commercial development known as Sunriver Village Mall. The Sunriver Village Mall offers vacationers and permanent residents a variety of businesses and services including restaurants, retail shops, vacation rental and property management companies. The community has a permanent population of about 1,700, though at any given time it may have many times as many vacationers in attendance. Sunriver has at least a dozen vacation home rental agencies offering hundreds of privately owned single family homes and condominiums. The Sunriver Resort Lodge has hotel rooms, banquet facilities, a fine dining restaurant, and other amenities. Sunriver Vacations, a conglomerate of four of the largest vacation rental companies, offers guests and the public a recreation center named Mavericks at Sunriver. Mavericks houses a cafe, rock climbing wall, cardio and weight gym, 2,500-square-foot (230 m2) meeting room, four-lane swimming pool, flowrider and kids pool with splash fountains.

Some of the adjacent land not part of the resort development, including commercial areas as well as numerous residential roads, is also considered to be part of “larger” Sunriver.

Sunriver has three 18-hole golf courses, many tennis courts, swimming pools, a park, a nature center, the Sunriver Observatory, stables, a marina, a general aviation airport, restaurants, a business park, the Three Rivers School and a shopping village, all accessible via the 35+ miles (over 55 km) of paved bicycle paths. Mount Bachelor ski area is a nearby (20–30 minutes) frequent destination for guests.